What I have been up to this AM

I hate to cook but love to grill! Does that make sense? I purchased a new grill this weekend, upgrading from the one I had been using. Lowe's was to deliver today between 12 and 4. So I showered early, went to Starbucks for a latte fix and returned home. I decided to cut out another Jalie 2794 pattern again using fabric in my stash. Once that was done I decided to trace another Jalie pattern, one of their new releases.

While doing that the doorbell rang and it was Lowe's about two hours early, but okay by me. So grill was unloaded from truck, set up, propane tank hooked up and ready to go. I returned to sewing room, completed the tracing of the new pattern, made my usual adjustments and now ready to cut out this pattern.

Meanwhile I had pulled some knit fabrics from stash (collection) that needed washing and preshrinking and put those on to wash. Yesterday I also pulled some other fabric from stash that I want to make up into dresses. All are fabrics that have been purchased over a year or more ago. One is from EOS, one from Textile Studios and one from Sewing Studio.

The first one I plan to sew is a navy linen blend fabric I purchased from Sewing Studio perhaps two years ago during one of their sales. I am going to use a Butterick pattern (4812) that received good reviews at PR. I am looking to make some simple items that don't require a lot of extras. I think this will fit that need. I want to make a simple jacket to wear with it to keep the AC at bay while at work. The inexpensive fabric that I purchased at WalMart a few weeks ago has navy stripes in it and I think it will work with this well.

More later. Off to grocery store to buy some steaks for grilling, maybe. The weather is overcast and some bouts of rain. These may have to wait until later in the week.
Email Post
Labels: Butterick fabric Jalie knits Sewing woven fabric 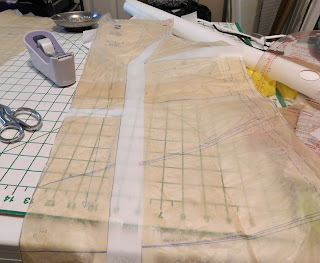 The shirt that almost wasn't or the pattern from hell! Part 1

Linda
Richlands, North Carolina, United States
Native of Danville, VA. I have lived in VA, TX, CA, FL, PA and now in North Carolina. I have been sewing since Junior High School. I like to sew fashion garments. I have made items for the Sulky Challenge and made numerous wearable art jackets, purses and vest in the past. Still a member of Roanoke Chapter of ASG as there is no ASG in my area