I have Gingher scissors and one pair I have had for over 30 years. I also have a few pairs my grandmother left to me when she passed away. I once had a sharpening stone that I used over the years to sharpen my scissors and somewhere in my last move, the stone is nowhere to be found. I got this from Nancy's Notions years ago. I have also taken my scissors to JoAnn's for sharpening when they were offering this service once every three months or more.

I  do not have a JoAnn's where I currently live and I don't even know if JoAnn's even offer scissor sharpening anymore.  I knew with my last project that the scissors were really dull and when I checked Nancy's Notions they did not seem to have a tool for this. I did not check any other source at that time.

Recently while reading reviews at Pattern Review, I came across a YouTube site "Sew Essential."  I went to that site to see a sewing tutorial. Once I clicked on the site, the first video to pop up was for scissor sharpeners. I immediately clicked on it and discovered that Fiskars had two scissor sharpeners. In the video, the sewist was using what to me seemed to be the better sharpener of the two. There is one for right and left-handed people. I never made it to the actual video I wanted to watch!

I found several sites that sell the sharpener; in the end, I ordered from Amazon as I had a couple of coupon codes to use worth $10 each. They actually arrived a day earlier than the projected date! It is simple to use from watching the video as well as for instructions on the box.

The image of the sharpener is in the right side column under Amazon Affiliate. Perhaps you and others may have looked for such a tool.  I am fully disclosing that should you use the link I may get a small commission.

I decided to cut out a few patterns using fabrics from my stash. I am hopeful that if I cut out two or more patterns I will be more motivat... 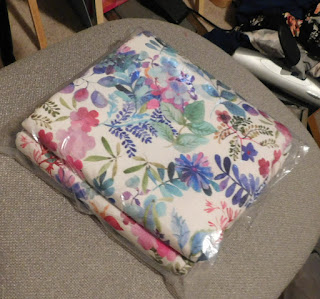 Linda L
North Carolina, United States
Native of Danville, VA. I have lived in VA, TX, CA, FL, PA and now in North Carolina. I have been sewing since Junior High School. I like to sew fashion garments. I have made items for the Sulky Challenge and made numerous wearable art jackets, purses and vest in the past.