Shorts and what I learned.

I made an effort to get over my FOPS-Fear of Pant Sewing! For years I shied away from sewing pants and shorts. Mostly because when I sewed them, I had to make so many changes. For me making one change created two more changes needed. I made one short pattern that I wore to death in the '80s.  My first pair of pants, back in the '70s, I wore to work, and after I got home I saw that the length was off on one leg and the topstitched hem looked awful!  Because I was able to buy RTW that fit much better, I decided pants were not for me to sew.

I attempted a Jalie Eleanor about two years ago that turned out okay. I attempted another pattern about 18 months ago and lost count of the number of adjustments I had to make. They were okay but I put aside and never wore them again.

I have been sewing for many years-around 40. Skirts, dresses, and jackets were my go-to sewing for years. I then began sewing with knits and found I liked sewing knit tops. But in the back of my mind, I felt I should be able to sew pants/shorts since I have been sewing for a long time. Having watched numerous videos on sewing pants, I really thought I should get going.

Having found Sinclair patterns that are drafted for petite, regular, and tall sizes, I decided to test the Moon wide leg pant, culottes, and shorts pattern. I enjoyed the process and found the tweaks I need to make was mainly choosing a smaller size.  Below are photos I took using my iPad and in a rush to get out of the house to buy groceries. 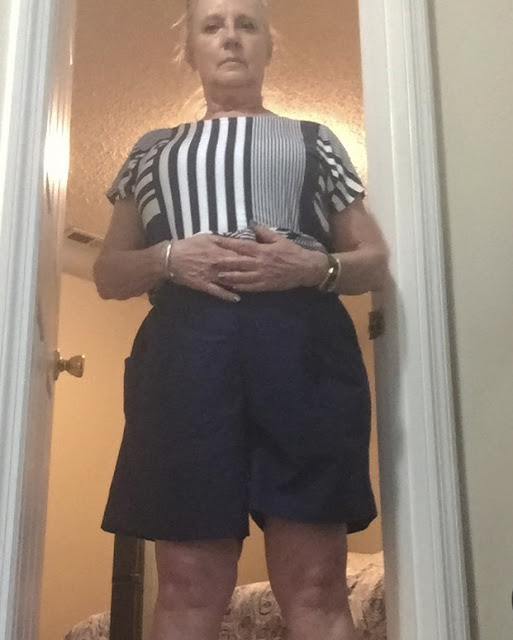 Front view. Didn't realize one leg was not pulled down. 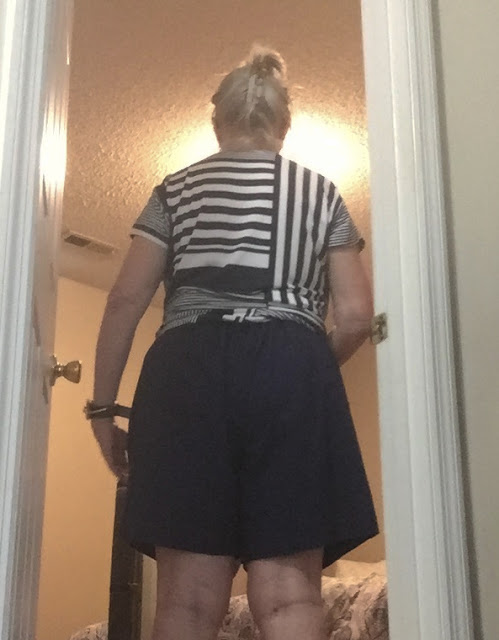 Back view
I was and am excited that the petite size has the perfect crotch length for me with this pattern. No adjustments needed.

I knew making these that they were wide legs and did sew a deeper side seam from below the hip/pocket to reduce the width. The legs as you can see are still rather wide.

My first thought was to make a smaller size but then went with the size 16. In taking a second look at the finished ease, I should have stayed with the 14 and maybe 12 for the hip to bottom. I am shaped more like a rectangle with not a lot of difference between waist and hip.  There is a lot of fullness in the back and should I attempt this pattern again I would take about an inch tuck in that area.

I do like the elastic back waistband with a flat front waistband. After wearing yesterday, I think I need to actually start at the side seam about an inch below the waist and take a deeper seam to match the deeper seam below the hip.

The fabric used was a cotton woven fabric purchased at Walmart for the test garment.

The crotch length on this pattern will be my sloper so to speak when attempting to sew other pants that are not Sinclair petite patterns. I have a couple of pant patterns I am now ready to try.

Yesterday, I purchased the Jakarta shorts pattern from Sinclair as this is more of a style I would like.  The next project for me is the Love Notions Melody dolman sleeve shirt. Pattern printed, taped, and ready to trace.

I am working on making Simplicity 9273. I purchased this pattern when Hobby Lobby was having a sale. I had planned on using a black crepe k... 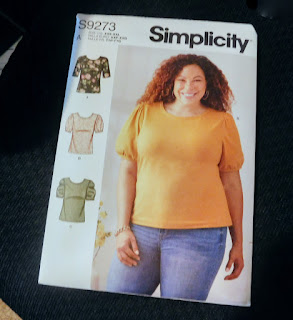