I have been fighting the "crud" all weekend.  Last year I got lucky and did not catch a cold; not so this year.  I have been sneezing, coughing all weekend.  Plus stuck in the house because of more snow Saturday on top of what we go on Monday/Tuesday.  Granted what we got is nothing like what has been going on in Boston, it was still enough to bring everything to a stand still in my neck of the woods.

Yesterday I pin-fitted Simplicity 1199 and made my usual adjustments.  This morning I cut out the fabric. 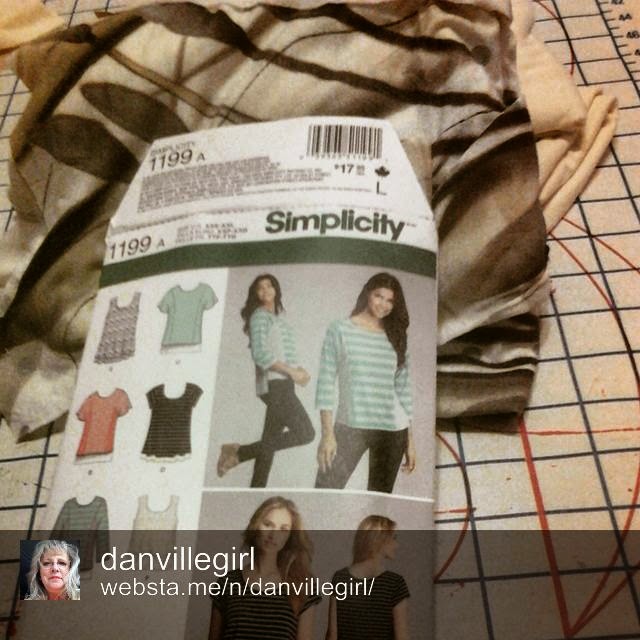 I did not have the battery charged for the camera so took a shot of the pattern and the two fabrics with an inexpensive tablet which does not do will for taking photos.   I am making View A, which is the same view as the model wearing the striped fabric.

The fabrics are from my stash.  The print fabric is a light brown, gray/green with cream background, the side panels will be sewn using the cream colored fabric.  The print is a knit I purchased from EOS and the cream I think I acquired from Fabric. com.  Probably both have been around for two years or more.

I began sewing the top after reading the instructions.  The construction process is not what I expected yet I think it will sew better their way than I had visualized sewing this.  I stopped sewing as I started to feel "yucky".  Hope to sew more later, but the Oscars are tonight and do plan to watch most of it.  I think it drags in places and unfortunately I am not real excited about this year's MC/host.  I like him as an actor just don't think he will do well for hosting.  We will see.

I hope you had a sewing weekend that was productive.  More later.
Email Post
Labels: Simplicity tops