NL6619 is becoming a reality

Thursday and Friday evening I completed the pattern adjustments so I could cut out the jacket pattern. Yesterday morning I was able to cut out most of the jacket and finished that process last night by cutting out the lining which I also had in my stash.
In looking at the fabric I realized that it had a specific pattern that imitated a stripe that would run horizontal if cut on the lengthwise grain. Horizontal stripes or patterns will make one look wider. I don't want that look for this jacket. Here is a photo of what I am describing. 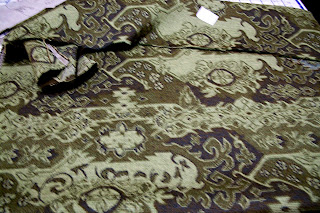 Sorry that the photo is not true to color and a little on the fuzzy side.
Hopefully you can see how the pattern seems to be running left to right.
I decided to cut the pattern on the crosswise grain thus the pattern would run lengthwise. Here is a photo of that look. The colors in this photo are truer to the actual fabric color. I took this without a flash. As I have said photography is not something I do well. 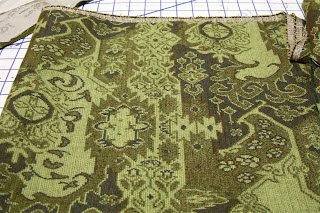