Top is ready to sew-Vogue dress pattern met with catastrophe!

The Lutterloh top has been cut out.  I am using fabric from Fabric Mart acquired earlier this year.  It is an unusual shade of lavendar/purple; maybe a brown lavendar. I actually had thread to match, as to serger thread, I am using dark gray.  I was going to use another fabric that was brown and gold but I did not have enough to make the top.  (The photo was taken using my BlackBerry) 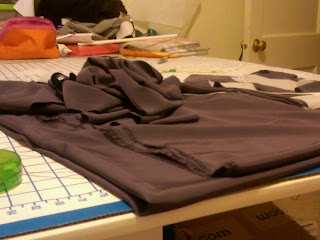 As to the Vogue dress, in my attempt to do a FBA, I really butchered the bodice pattern pieces.  So badly butchered, that I just could not get the pieces back to any resemblance of what they originally looked like.  My intent was good, execution was faulty.  So I will wait for Vogue patten sale and repurchase the pattern.  I will use plan B for FBA method, more along the pivot and slide method.
Email Post
Labels: Fabric Mart Lutterloh System pattern tweaking Vogue